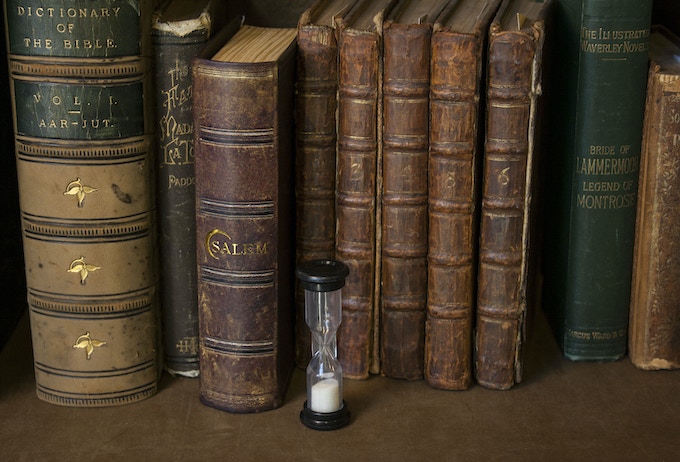 "The year is 1692, and it is a perilous time to live in the town of Salem, Massachusetts. One wrong step, or one misplaced accusation, and you could be the next witch to hang. "Salem" takes players into this perilous world and lets them re-live the tension, politics, and religious extremism that still has people talking about it 300 years later.

The game is packaged in a faux book box that closes magnetically. The game, disguised as a worn out leather book, can easily hide on your bookshelf and masquerade as an antique.

Players can play as prominent villagers from the old Salem town, and even read their bios in the instruction manual. The servant girl Mary Warren, pastor Samuel Parris, farmer John Proctor, storyteller Tituba, and beggar Sarah Good are some of the 12 characters featured in the game.

Players, each acting as one of these unique characters, are given 3-5 Tryal cards (depending on the number of players). These Tryal cards reveal the true identity of each player, "Witch" or "Not a Witch."

During gameplay, players gather cards that they use to accuse, or defend, other players. Deciding who to trust is key to survival, since you can never play a card on yourself. When you suspect someone to be a witch, you can begin accusing them with red accusation cards. When enough accusations have been placed on one of the players, the player who lays the final accusation chooses one of that player's Tryal cards to reveal. Once all "Witch" Tryal cards have been found, the villagers of Salem win.

Players can also use green and blue cards such as "Alibi", "Stocks", "Matchmaker", "Asylum", and "Scapegoat" to help or hurt their allies or enemies.

As players draw cards, they will eventually draw black cards that take immediate effect. One black card, "Night", forces all players to close their eyes while the Witches choose someone to eliminate and the Constable chooses someone to potentially save. The other black card, "Conspiracy," forces all players to take a face-down Tryal card from the player to their left. Killing witches quickly is essential, otherwise "Conspiracy" may soon have the whole town turned evil.

Before long, accusations will be flying, and screams of "She's a WITCH!" will wake the neighbors. Will you be the hero who purges your town of witches, or will you be wrongly accused and hung for witchcraft? Or perhaps you will be a witch yourself, escape conviction, and bring Salem to the ground."

Red Cards are placed on a player, not necessarily in front of a certain Tryal card. If the number of accusations played on a player exceeds the required amount to reveal a Tryal (Example, if you played an Evidence card on someone with 6 accusations), they do not carry over to the next Tryal).

When a player dies, his or her blue cards are placed in the discard pile. If only two players are left, all blue cards are discarded from the game. If you are one of the last two players remaining, when you draw a blue card place it aside and draw a new card instead.

As the first law of Salem states, the Constable may never give himself the Save token. If the Constable is also a Witch, he or she is an “evil” Constable, and may use his or her power to help the Witches. The Constable can not abstain from placing the Save token, unless the Asylum card is in front of him or her.

If both Matchmaker cards are placed on the same player, they are discarded. If one of the Matchmaker owners is killed during the Night, both die, even if the other person “confessed” or was saved during the Night. If a player is matched with Mary Warren when she dies, that player still dies, even though Mary is unaffected by Matchmaker.

As stated in the second law of Salem, Witches may place the Kill token on themselves during The First Night, giving themselves the Black Cat card to throw off suspicion.

As implied by the first law of Salem, the effects of Scapegoat and Robbery can never affect you. They may only involve two other players, ex. taking cards from one player and giving them to another.

If Martha has inherited John Proctor’s special ability, Martha and John look at the cards they will receive from the dead player and take turns picking cards, starting with John.

If Thomas is playing accusations on George, Thomas needs 7 accusations to reveal a Tryal.

To make the placement of tokens less obvious:

To make the game more difficult:

How can I prevent games from ending quickly when the witch card gets revealed early on? [1]

One of our users, Thomas Averette, had a great idea. Here’s what he said: “One idea I had was a “Benefit of a Doubt” rule where if you have 3 or more Tryal cards face-down the accuser chooses 2 cards instead of one and the accused gets to choose which one to reveal. The benefit of this is that unless the Witch makes a mistake there will not be an early Tryal reveal. The players will still get a great deal of information by how the accused reacts to the Tryal cards chosen (hesitation, relief, etc.). I don’t think this would create much benefit for the Witch as a group who is convinced will quickly reduce the Witch to two cards and the Benefit of a Doubt will no longer apply.”

Why are there blank blue, green, and Tryal cards in the game? [2]

These cards can either be used to replace worn-out or lost cards, or they can also be used to invent new cards in the deck! If you have an idea for a new green, blue, or Tryal card, we’d love to hear about it! Contact us so we can spread the word.

Spy: Gets to see one Tryal card during the Night. [3]

Pardon: When played on a player who has lost at least one Tryal card, that person randomly chooses one Tryal card from all those previously discarded in the game. This could re-introduce the Constable, or even make them a Witch. It could serve to slightly extend play, and balance the power to an ally who is lagging behind in remaining Tryal cards. (From Dennis Gorsline) [4]

Peek: The person it’s played on gets to see one Tryal card on any player. (From Austin) [5]

Keep order, operate the hourglass if people are taking too long, enforce the laws of Salem, and most importantly, keep the dead silent!